This blog is a definition of some of the terms I have been using in previous blogs and that I will use in future blogs.

Sound Pressure Level
Sound, or noise, is the term given to the variations in air pressure of which are capable of being heard. Tiny imbalances in atmospheric pressure is the thing that is measured by a sound level meter. Because humans can detect changes in atmospheric pressure over a huge range, sound pressure is measured on a logarithmic scale in decibels (dB). Noise means “unwanted” sound.

Because sound pressure levels are measured on a logarithmic scale, the combination of sound levels is not a simple sum. As an example, two noise sources that produce 50 dB at a particular distance that are put together produce a result of 53 dB at that distance, not 100 dB. Two noise sources with levels of 40 and 50 dB together will produce a total of 50.4 dB.

People’s sensitivity to noise is very individual. Sensitivity depends on the frequency, ambient sound levels, time when it happens, how long it occurs for, and psychological variables like emotions and expectations. However, in general, a change of 1 or 2 dB in the level of sound is difficult for most people to detect. A 3 dB change is commonly taken as the smallest perceptible change and a 6 dB change corresponds to a noticeable change in loudness. A 10 dB increase or decrease in sound level corresponds to an approximate doubling or halving of loudness, respectively.

A-Weighted Noise Level
Scientific tests demonstrate that at equivalent noise levels, humans are more sensitive to high frequency sounds (horns, whistles, talking) in comparison with low frequency sounds (generators, engines). To cope with that preferential response to frequency, the A-weighted scale was created. The A scale size adjusts the noise level in every frequency band in the same manner how the individual ear does. So the A-weighted decibel level (dBA) is one number that describes the level of sound as heard by humans. Various sounds with the same A-weighted level are perceived as being equally loud. The A-weighted sound level is often applied in environmental sound investigation as well as in noise laws. Some examples of A-weighted sound levels are presented in Table 1.

Leq
Equivalent Sound Level (Leq) is a variety of average. It is the steady level that over a period of time will produce the same energy as the signal. The actual noise at any instant will be higher and lower than the Leq during the period.\. The A-weighted Leq is a frequently used for environmental sound.

Day-Night Average
The day-night average noise level (DNL) is a 24-hour average level calculated through averaging (on a power basis) the hourly Leq levels for each hour in a 24-hour period with a 10 dB increase during the nighttime hours (10pm to 7am).

Frequency
Sound level is a single number measured on a sound level meter in dBA. Frequency is measured in Hz and is a measure of the cycles per second.. One can evaluate a sound spectrum by using the signal from a microphone and doing an FFT (Fast Fourier Transform). The sound spectrum demonstrates the amount vs frequency (Hz). A spectrum is useful to figure our how to reduce the noise and it identify different noise sources.

Other descriptors will be defined as needed. Like: STC, IIC, RC, NC, reverb time, …

Thank you for visiting Noise Expert Acoustical Consulting – Please let us know if you have any questions or if you would like our assistance with acoustical evaluations. 480-332-9325, info@noiseexpert.com, www.noiseexpert.com

Get the free Acoustics Guide

Get the free Acoustics Guide

Noise Engineers is is an acoustical consulting firm that conducts noise measurements, analysis, reporting, materials and installation for environmental and architectural noise issues. 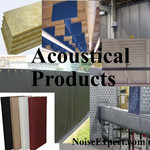